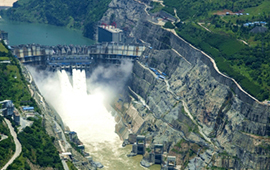 The Xiluodu Project is the first project to be developed in the cascade hydropower development along the lower reaches of the Jinsha River. It is located in the Xiluodu valley on the boundary between Leibo County , Sichuan Province, and Yongshan County, Yunnan Province.

With a normal impoundment level at 600m,the Xiluodu Dam has a total storage capacity of 12.67 billion m3 and a regulation reservoir capacity of 6.46 billion m3.It has a seasonal draw down period. It will be equipped with eighteen 770MW generating units, with a total capacity reaching 13,860MW. The total annual power output will be 57.12 Twh. Its installed capacity will be comparable to the world’s second largest hydropower station, the Itaipu Dam (14,000MW). It will

The construction of the Xiluodu Project was officially kicked off in2005 ,the river closure was realized in 2007,and the first batch of generating units was put into service in June, 2013.The whole project was completed in 2014.

The major function of the Xiluodu Project is to produce power. It also brings benefits in sediment detention, flood control anddownstream navigation. The Xiluodu Project is a backbone project for the West-to-East Power Transmission Project. It can supply high-quality electricity to Central and Eastern China, thus improving China’s energy structure and alleviating power supply shortages in East China.