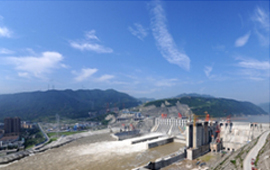 The Xiangjiaba Hydropower Project is the last step of the cascade development of the main stream of the Jinsha River .It is located on the lower Jinsha River ,bordering Yinbin County in Sichuan Province and Shuifu County in Yunnan Province.

The Xiangjiaba hydropower station’s normal impoundment level is 380 meters.  The Xiangjiaba reservoir has a total storage capacity of 5.185 billion m3, and its active storage capacity is 905 million m3.The dam has a seasonal drawdown period.The Xianjiaba Dam has eight 800 MW generating units and a total capacity of 6,400MW . Its annual electricity production will average 30.747 billion TWh.

The construction of the Xiangjiaba Project officially beganin 2006. The river closure was realized in 2008. The first3generatingunits wereput into servicein 2012, and the whole project was completedin 2014.